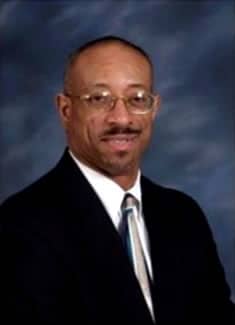 It is with deep sadness that we announce the passing of Rev. Dr. Kary Gerone Free. Dr. Free transitioned from earth to eternity on October 31, 2020 at Integris Baptist Hospital in Oklahoma City, OK.  For over 19 years, he shared his life with his wife, First Lady Velva Fuller Free. He was the father of three, daughters, Kari Yvonne, who preceded him in death, Erika Alexis, and son, Delmar Boone.

Dr. Free accepted Christ and his call into the ministry at an early age preaching, his initial sermon at the age of 18. He graduated from Rancho High School, and attended the University of Nevada at Las Vegas where he earned his undergraduate degree.  He earned his Master’s degree from Virginia Union in Richmond, VA, an honorary doctorate degree from the Determined Biblical Theological Institute of Baltimore, MD and an honorary doctorate degree from the Fellowship Bible Institute.

Dr. Free dedicated his life to preaching, mentoring, and pastoring.  He first pastored in Susan, VA at the Antioch Baptist Church.   He then pastored the Gethsemane Missionary Baptist Church in Norristown, PA.  In 1988 he was called to pastor the Greater Mount Carmel Baptist Church in Oklahoma City, OK and served there as pastor until his death. He believed strongly in prayer.  He introduced his congregation to the book Could You Not Tarry One Hour by Dr. Larry Lea and instituted early morning prayer along with 24 hour prayer prior to revivals.

Dr. Free was an active member of the Progressive National Baptist Convention (PNBC) and served in many leadership positions on the local and national level.  He served as Vice President-at-Large for the PNBC Southwest Region, Chair of the PNBC Evangelism Board, and teacher for the PNBC Congress of Christian Education.   He was a member of the Progressive Oklahoma Baptist State Convention (POBSC) and the Baptist Minister’s Association in Oklahoma City.  Dr. Free was Board President of the One Church One Child Adoption Program of Oklahoma for 15 Years and was Board President of the National One Church One Child Adoption Program under the Founder, Father George Clement.  He was a member of the NAACP, the Oklahoma City Concert of Prayer and a member of the Alpha Phi Alpha Fraternity, Inc.