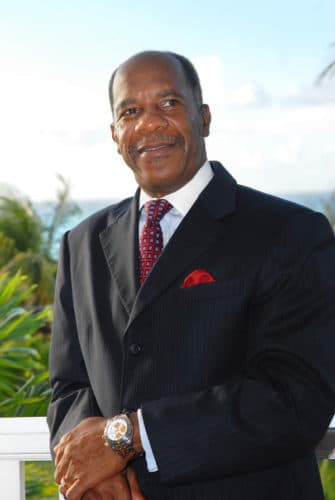 Reverend Dr. Timothy Stewart, Pastor of the historic Bethel Baptist Church in Nassau, Bahamas, is an accomplished National and International spiritual and civic leader. Dr. Stewart is a truly gifted and anointed pastor/teacher with eloquence and effectiveness par excellence, with the heart, soul and mind of a humble Servant of God.

Having received the call to become the Pastor of Bethel Baptist Church at the age of twenty-five, Dr. Stewart has become one of the longest serving pastors of the oldest Baptist church in The Bahamas, and the oldest continuing Baptist church in the Caribbean. Throughout his tenure, Dr. Stewart has faithfully served God and the constituencies of Bain and Grants Town, which are among the largest and oldest working-class communities in The Bahamas. Today he still provides food (over 30,000 meals per year), clothing, counselling, educational development opportunities and other important human services to these communities freely. Pastor Stewart’s leadership has been demonstrated for decades and this sacred gift has elevated him in August 2018, to become the first ever non-American to ascend to President of the Progressive National Baptist Convention, Inc. which has membership of more than 2.5 million believers throughout North America, the Caribbean and the world. PNBC is a preeminent religious entity headquartered in Washington, DC with worldwide reach through its member churches, whose mandate is to give full voice, sterling leadership and active support to the American and world fight for human freedom. The Convention was the convention-denominational home and platform for the late Rev. Dr. Martin Luther King, Jr., and is now led by Rev. Dr. Timothy Stewart.

Dr. Stewart’s National accomplishments are many. He is the Moderator of the Bethel Baptist Association in Nassau, Bahamas, having served in this capacity since 1997. The Association comprises seventeen Bahamian churches throughout the archipelago of The Bahamas, and Dr. Stewart is a past Executive Board Member of the Bahamas National Baptist Missionary and Educational Convention. Dr. Stewart has taken on a leadership challenge as a National voice to provide spiritual guidance to Political leaders and Bahamians in general on matters affecting National Development, and more specifically underprivileged people. He has served as board member to a plethora of organizations in the Bahamas including the Prerogative of Mercy Board, Judicial Review Commission, Hospital and Health Care Facilities Licensing Board, Chaplain of the House of Assembly, Board Member of the Bahamas Development Bank and Member of The Bahamas Juvenile Panel.

His early Christian training included a 1980 Bachelor of Arts Degree in Bible and Theology with a minor in History and Social Science from the American Baptist College. Dr. Stewart pursued a Master of Divinity Degree in Theology at Southern Baptist Theological Seminary, but during his matriculation he was called home to Nassau to Pastor Bethel Baptist Church. Nevertheless, he continued his formal education at Southern Baptist Theological Seminary in Louisville, Kentucky between 1980-1982, and was awarded the Master of Divinity and an honorary Doctor of Humane Letters from Eastern Theological Seminary, Lynchburg, Virginia. Dr. Stewart is married to Sharon Stewart (nee Williams) and they have three sons, Timothy II, Henry and Gardner.